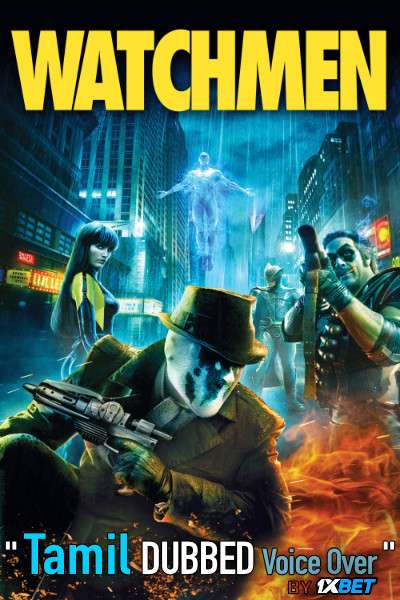 #WatchmenUltimateCut (2009) Dubbed in Tamil By 1XBET is an Unofficial Dub Just for Promotion so if u Don’t like There Dub just ignore Don’t Comment or send any msg to us .

The times did change. After so many super hero movies this one has become the best one of them. The “Ultimate Cut” edition incorporated the animated comic Tales of the Black Freighter into the narrative as it was in the original graphic novel, lengthening the runtime to 3 hours and 35 minutes, and was released on November 3, 2009. The director’s cut was received better than the theatrical release.

It’s 1985 in an alternate reality. The Watchmen – comprised of the Comedian, Dr. Manhattan, Nite Owl II, Ozymandias, Rorschach and Silk Spectre II – are a disparate band of masked superheroes, modeled after the Minutemen, who were masked superheroes of a generation earlier, most of who are dead or afflicted by the ravages of life. The Comedian belongs to both groups. Despite the activities of the Watchmen leading to the west winning the Vietnam War which in turn has kept Richard Nixon in the White House, Nixon has now outlawed masks, resulting in the Watchmen disbanding and going into retirement, most hiding their Watchmen past under their human identities. However, the Comedian, in his human persona of Eddie Blake, and Dr. Manhattan – former physicist Jon Osterman who obtained his superhero powers through a scientific accident which almost killed him – now work for the government. Dr. Manhattan’s powers in particular have kept a watch over nuclear proliferation, as he is able to stop…