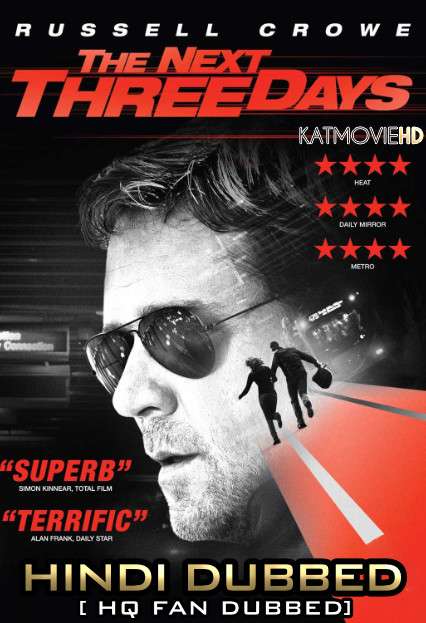 The Next Three Days is a 2010 American thriller film ,
Now in Hindi [Fan Dubbed] .

Lara Brennan is arrested for murdering her boss with whom she had an argument. It seems she was seen leaving the scene of the crime and her fingerprints were on the murder weapon. Her husband, John would spend the next few years trying to get her released, but there’s no evidence that negates the evidence against her. And when the strain of being separated from her family, especially her son, gets to her, John decides to break her out. So he does a lot of research to find a way.

What if you had 72 hours to save everything you live for?

Russel Crowe plays John and Elizabeth Banks plays his wife.one night she is arrested for murder.after years of fighting with the legal system to try to free her,he learns she will be sent to prison for life in three days.now he must find a way to stop that from happening.this movie is full of suspense and intensity.it’s tightly written(Paul Haggis wrote the screenplay)and well directed by Paul Haggis.the acting is superb from both Russel Crowe and Elizabeth Banks,who continues to show her flair as a dramatic actress.Daniel Stern had a small role,but was very impressive as well.this is a film i’d definitely watch again.for me,The Next Three Days is a 7/10