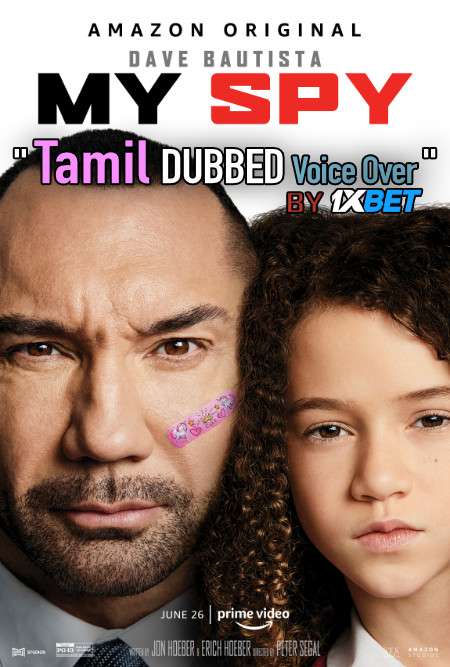 #MySpy (2020) Dubbed in Tamil By 1XBET is an Unofficial Dub Just for Promotion so if u Don’t like There Dub just ignore Don’t Comment or send any msg to us .

My Spy is a new family action comedy directed by Peter Segal, the director of Get Smart and Tommy Boy.

The film is about the ex-military JJ (Dave Bautista), who after his time in the army now tries to work as a CIA agent. During his missions he still works too much as a soldier. The CIA does not get the necessary information and decides to use JJ for undercover operation. JJ now has to spy on mother Kate (Parise Fitz-Henley) and her young daughter Sophie (Chloe Coleman) in the hope that her arms trade partner contacts his family. JJ is soon discovered by the clever nine-year-old Sophie, who promises to share nothing about his secret mission with the rest of the world. In return, JJ has to train her on how to become a spy herself.

This movie has his amusing moments about how a young girl can outsmart a novice CIA agent. This aspect has come up before in other films such as the Arnold Schwarzenegger film Kindergarden Cop. For people familiar with such films, this film can quickly become predictable. The script clearly shows the bond between JJ and young Sophie, but the film concentrates a bit too much on this band at a time. For example, the aspect of the secret arms trade is somewhat canceled. The scenes that pass here seem a bit like separate scenes from a completely different film. These different aspects only come together at the end of the film, but otherwise seem to have little in common.

The comedy moments are also somewhat predictable if you are familiar with these kinds of comedy movies. Dave Bautista comes across as a budding CIA agent who doesn’t yet know how to best handle his job. While it seems a bit unbelievable that the CIA is discovered by a nine-year-old girl and she manages to outsmart them, these moments make for the best comedy in the movie. For a novice young actress, Chloe Coleman does good and appropriate acting in this film. The better known comedy actors such as Kristen Schaal and Ken Jeong still have more of a cameo in this film and only have a few small comic moments.

A hardened CIA operative finds himself at the mercy of a precocious 9-year-old girl, having been sent undercover to surveil her family.