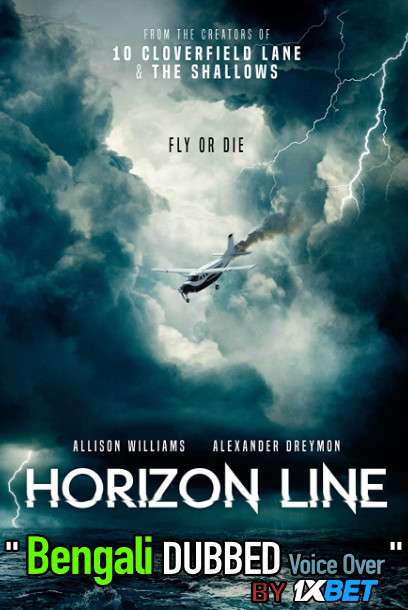 #Horizon Line (2020) Dubbed in Bengali By 1XBET is an Unofficial Dub Just for Promotion so if u Don’t like There Dub just ignore Don’t Comment or send any msg to us .

Horizon Line is a new survival thriller directed by Mikael Marcimain, the director of Call Girl and Gentlemen.

In the film, Sara (Allison Williams) is invited to the wedding of one of her best friends, who is getting married on a tropical island. When Sara misses the ferry to the island, she asks her friend Wyman (Keith David) if he can fly her to the island with his own small plane. When her ex Jackson (Alexander Dreymon), who has also been invited to the wedding, goes on the plane, it creates an uncomfortable situation on board. When Wyman suddenly has a heart attack during the flight, the exes have to keep the plane in the air while they fly towards a storm.

This survival film is largely set in the plane that must be kept safely in the air. The writers of the film script have managed to handle a similar situation well in the film 10 Cloverfield Lane, but in this film they had a bit more space and characters to work with. Due to the lack of space and characters in this film, this film also lacks real tension. The only real tension comes when they have to fix certain things on the plane to keep it in the air, but some of these actions make the film lose its credibility.

The acting is nicely done by the cast members, but because there are few actors in the film, the pressure is on the two protagonists. Allison Williams mainly takes the foreground, but stupid choices that her character makes, her opponent is actually only more at risk. This makes it a bit difficult for the viewer to really care about her. The best and most fun acting comes more from Keith David, but his character is only in the film for a short time.

A couple flying on a small plane to attend a tropical island wedding must fight for their lives after their pilot suffers a heart attack.