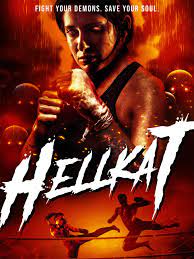 #HellKat (2021) Dubbed in Telugu By 1XBET is an Unofficial Voice Over Dub Just for Promotion so if u Don’t like There Dub just ignore Don’t Comment or send any msg to us .

I’ve been waiting for this flick for a while now, HELLKAT is finally here!

A fallen MMA fighter must win a netherworld no-holds-barred death tournament against man, beast and demon to save her soul.