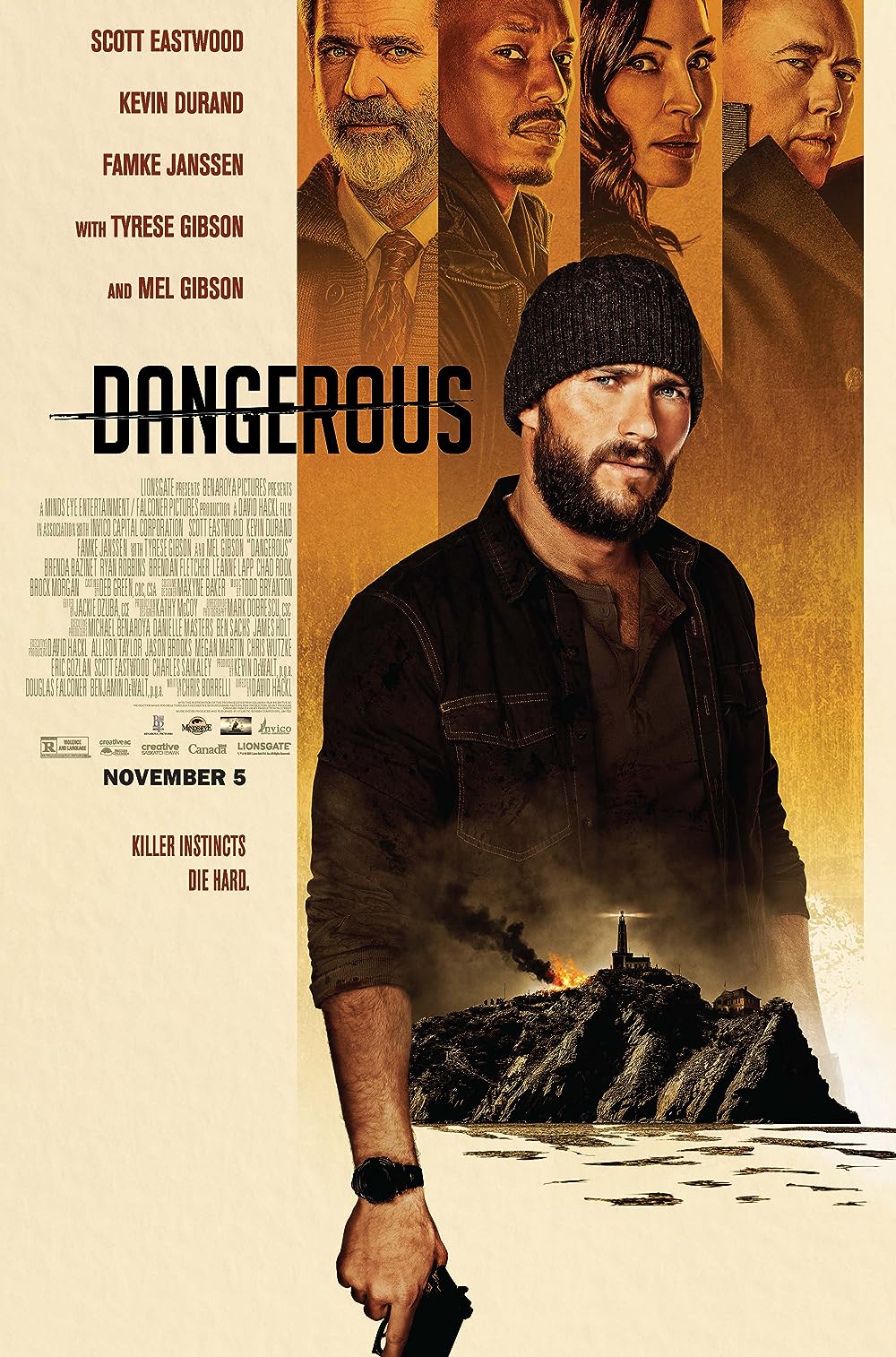 #Dangerous (2021) Dubbed in Hindi By 1XBET is an Unofficial Dub Just for Promotion so if u Don’t like There Dub just ignore Don’t Comment or send any msg to us .

Scott Eastwood stars as a guy who has been incarcerated under psychiatric care for many years due to a violent nature that’s been given plenty of exercise throughout his life. He learns of his brother’s untimely death and rushes to the remote island off the Washington coastline that was his final home and project. The former WW II defense facility features a large, rambling house he was restoring as a resort hotel.

Upon arrival, he’s greeted with venomous hostility from his mother (Brenda Bazinet), who mourns the loss of her “good son”, and has hated Eastwood for all the troubles and embarrassments suffered on account of his years of misconduct. He’s taking meds and receiving on-demand counseling from a shrink (Mel Gibson) who urges Eastwood to control his urges, even beyond the point of reality. The rehab plan is sorely tested just after he gets there when a gang of thugs takes control, searching for something that none of the few captive residents know about. The rest of the film involves gradually learning more about Eastwood, his brother and their histories with this vicious group – especially their smugly sadistic leader (superbly played by Kevin Durand) in a cat- and-mouse exercise in survival.

Oh. I forgot that dashing off to the island violated his parole, adding pursuit by an angry FBI agent (Famke Janssen) to Eastwood’s burdens. What’s relatively unique to this spin on a common setup is Eastwood’s sincerely clueless struggle to overcome the sociopathic side of his nature. That’s enhanced with a darkly comical series of phone calls to his shrink, seeking help coping with the increasingly dangerous conditions and choices facing him. He really doesn’t want to undo his progress from years of therapy by killing any more people, even when circumstances are screaming for him to reactivate his … shall we say… particular set of skills.

That element of grim character humor and the smarmy psychopathy of Durand’s character elevate this somewhat above B-movie norms. Eastwood’s internal struggles come across believably enough to arouse our empathy, thereby supporting engagement in the suspense of learning what the bad guys expect to find that’s worth this much trouble, and who will survive the ordeal. Credit also goes to the location scouts and set designers who provided such a wonderfully complex and ominous locale for events to unfold. This is no dramatic masterpiece; nor was one intended. But if you’re in the mood for grimly violent crime fare, you could do a heck of a lot worse. I know that because I’ve done so on many, many occasions.

Ex-con and reformed sociopath Dylan Forrester is trying to quietly serve out his parole, with the help of a steady supply of antidepressants from his eccentric psychiatrist. However, when his brother dies under mysterious circumstances, Dylan breaks parole. With a determined FBI agent on his trail, Dylan goes to uncover the truth. Meanwhile, a band of armed mercenaries wants something Dylan’s brother was hiding, and Dylan will need all his cunning and tactical skills to survive.

How to Download Dangerous 2021 Movie in Hindi Dubbed  for Free :

To Download Dangerous [Hindi Dubbed] You Have TO CLICK ON LINKS Below > Download Link < Option on this Page and You Have Multiple Links For Download If You Want to Download Using Torrent Use Magnet Link & If U Want To Direct Link Use Anon-File / G-Drive [For Google Drive Link] All These are High Speed Download Links .

How To Watch Dangerous Full Movie in Hindi Online: If U Want to Watch This Movie Click On >Watch Online< Button ! .