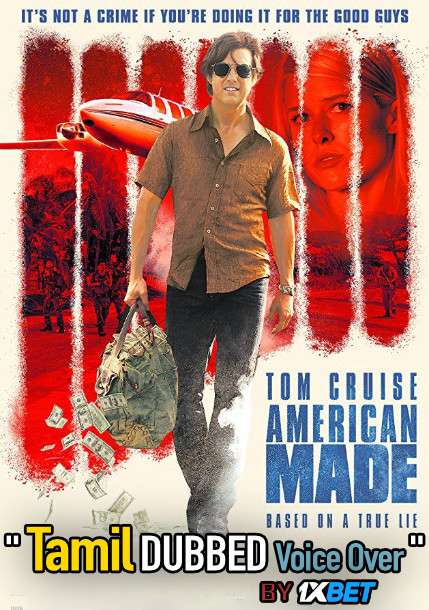 #AmericanMade (2017) Dubbed in Tamil By 1XBET is an Unofficial Dub Just for Promotion so if u Don’t like There Dub just ignore Don’t Comment or send any msg to us .

Very few directors have tapped the clown in Tom Cruise the way Doug Liman has. He had directed Tom in Edge of Tomorrow which was humorous and was set amidst a post-apocalyptic alien invasion. American Made is just as humorous and is also set amidst an invasion of sorts except this movie is a true story. Captain Barry Seal had the adventure of a lifetime before falling prey to a monster of his own doing. But what an adventure it might have been for this man to smuggle contraband into and out of the States.

I felt Tom Cruise did a great job portraying the pilot in an extremely light-hearted and funny way. Cruise is known for playing roles that ooze oodles of dare-devilry. But most of those roles are of fictitious characters. For once Tom plays a real man whose daring knew no bounds. Captain Barry Seal was like a real-life Ethan Hunt. Hence I feel casting Cruise as Seal was an extremely appropriate decision and should help in filling Universal Studios Entertainment’s coffers.

Barry Seal was just an ordinary pilot who worked for TWA before he was recruited by the CIA in 1978. His work in South America eventually caught the eye of the Medellín Cartel, associated with Pablo Escobar, who needed a man with his skill set. Barry became a drug trafficker, gun smuggler and money launderer. Soon acquiring the title, ‘The gringo that always delivers’.